Hague is ‘clearly a leader’ in road salt reduction 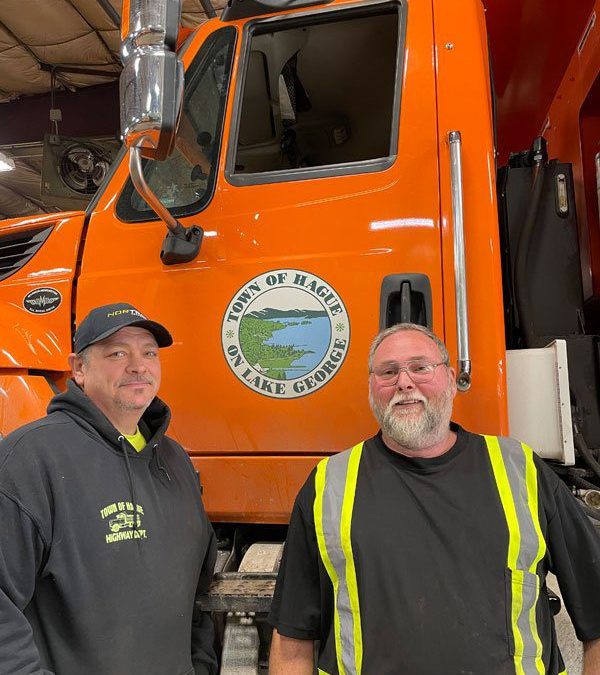 Hague plow operators Tim Fiallo, left, and Ernie Trudeau stand in front of one of their plow trucks. Photo by Zachary Matson

After years of brine, indicators are seen in water quality

The small crew at the Hague Highway Department spent part of a December morning staring into a measuring device as they mixed salt and water in a 1,000-gallon tank.

“Where are we at?” Matt Coffin asked Tim Fiallo, who doublechecked the refractometer and reported that the brine’s salt concentration was approaching the desired 23.3%.

The crew took advantage of the sunny weather to mix up a batch of new brine, topping off a series of eight 3,000-gallon storage tanks raised off the ground on cement blocks behind the town garage.

The brine is a key tool in Hague’s battle against slippery winter roads – and their battle against the tons of road salt polluting Lake George. This will be the third winter the crew is using the alternative to straight salt.

By spreading the brine mix on roads prior to a winter storm, the plow operators aim to prevent the initial bond between snow and ice on asphalt. The Hague operators will apply about 50 pounds of salt per mile of road using the brine. In the past, they estimated they would have dropped 300 to 400 pounds of undissolved rock salt over the same distance.

The department also saves money by making the brine at the garage — 10 cents per gallon compared to about $1.25 if purchased wholesale.

The crew this winter is planning to use brine applications on about 20 miles of road, aiming to further reduce salt use. The brine is also used to pre-wet hard rock salt as it drops from the plow trucks, since road salt is only effective after it mixes with water and starts to dissolve.

“I eat, breathe and sleep it,” said Fiallo, who joined the Hague crew full time six years ago.

Now that Gov. Kathy Hochul has appointed members to a task force focused on reducing road salt use in the Adirondack Park, the work of towns like Hague can point to ways other towns can minimize salt use. The state Department of Transportation, a major applicator of salt contaminating groundwater in the Adirondacks, might take cues as well.

Early signs indicate the reduced salt load on Hague roads has resulted in a reduced chloride load in Hague Brook, which spills into the northern part of Lake George near the Hague Town Beach. Joel Harrison, a research scientist at the Darrin Fresh Water Institute, found that chloride concentrations in Hague Brook dropped on average 4% a year between 2016 and 2020.

While researchers said more data is needed to confirm a link between reduced salt use in Hague and the shrinking chloride concentrations in Hague Brook, the finding served to bolster spirits that the Hague crew was on the right track.

“Hague is clearly a leader. It’s definitely a trend in the direction that we want.”

Navitsky approached the Hague highway department about six years ago and asked if they would participate in a salt reduction program around the lake. The Fund for Lake George, now part of the Lake George Association, helped the department purchase new live-edge plows, which conform more closely to the road. Even if the plow operators were leery about environmentalists telling them how to do their jobs, they weren’t going to say no to an equipment upgrade.

“They just wanted us to try it,” Fiallo said. “I had skepticism.”

Since those initial conversations, the Hague crew’s skepticism has melted away and been replaced by a passion for salt reduction, trumpeting their success in hopes that others may follow.

“We understood that, wow, this can go even further,” Fiallo said. “There are always what ifs and what we need to learn. We want to take it to the next level.”

The Hague playbook includes more than just brine. Each plow truck is outfitted with GPS devices that tracks not only its location but the amount of salt it is spreading on the roads. Four combined camera and weather stations are located throughout for immediate information on road conditions and temperatures.

The operators use specialized software to collect data for analysis on salt used to change road conditions. This can inform future decisions about how to deal with storms. The Hague crew also regularly calibrates equipment to ensure accurate data and consistent salt application rates.

Working with consultant Phill Sexton, who contracts with the Lake George Association to assist towns throughout the Lake George basin, Hague continuously analyzes how much salt they are using the results on the roads.

Sexton, who was recently named to the governor’s road salt task force, said the path to reducing salt use is no big secret. The hardest part, though, is getting everyone in a highway department – or a state bureaucracy – to commit to cutting salt use as a worthy and achievable goal.

“Best practices, quote-unquote, have existed for decades,” he said. “The issue is a matter of implementation and how to do it in a systematic way.”

Ultimately, Sexton and others said, it comes down to creating a workplace culture devoted to the same goal: safe roads with as little salt use as possible.

“The bottom line is it’s cultural,” said Sexton, who more recently has also started working with North Elba and the Village of Lake Placid. “We’ve been trying to push for years and help people understand, you can throw all the tools and tech you want at this thing, but that doesn’t mean people are going to implement it.”

The Hague operators understand the culture they are building and the importance that they all believe in it. They press each other over strategy before and after each storm; they compete to see who can limit their salt use the most.

“What a difference between old school and new school,” said Ernie Trudeau, a plow operator for 11 years. “I’m a firm believer in what we are doing.”

Coffin, Hague’s deputy highway superintendent, said the department said he was surprised with the outcomes of the new approach of less salt. “We were trying to make the roads safer for ourselves and the public,” Coffin said. “We found out we were able with different strategies, we were able to reduce our numbers. We didn’t mean to do it, but that’s how it worked.”

Nonprofit ADKAction adopted road salt reduction as one of its core issues nearly a decade ago, working to get more communities across the park focused on it. Twenty-six municipalities joined the effort and adopted resolutions committing to reducing their salt use.

This year, ADKAction is working with over two dozen of those communities, focused around Lake Champlain, to find their current practices and needs. The nonprofit plans to look at how far along the path to reducing salt they are and let them work together to make progress down that path. The Ausable River Association is working on a similar survey of communities in its watershed.

“It builds community between different garages,” said Brittany Christenson, executive director of ADKAction and another recently-appointed salt reduction task force member. “You can have pristine policies on the books, but if they don’t change their practices we are in the same boat.”

She said local plow operators face challenging demands and that a broader movement is needed to show them and others the importance of reducing salt use.

“Culture change is critical,” Christenson said. “The folks working in these roles already have very difficult jobs, being up in the middle of the night, making a lot of decisions. They have a lot of competing priorities, and it takes a lot to nudge reducing salt use up that priority list.”

It has been slower going among some highway departments. Sexton said he has seen some towns backtrack because of leadership changes in highway departments or town government.  A severe storm or accident can create political dynamics that reverses new policies.

“It’s a tough job, these guys are driving in difficult conditions to make the roads safe,” he said. “They know what does work. Are they willing to change those practices to be in conditions they are not sure are going to work, even though it’s been shown in other towns?”